This article about Zephyrus is a stub. You can help Mythology wiki by expanding it.

In Greek mythology, Zephyrus was the god of the west wind and Spring. His Roman counterpart is Favonius and he is also known as Eiar, the embodiment of Spring.

He resided somewhere in Iberia, near the Garden of the Hesperides.

When his brother Eros accidentally hit himself with an arrow of love and became enamored with a mortal woman named Psyche, Zephyrus helped abduct her.

He is often depicted as a green-winged god clothed in a green robe and crowned with a wreath of flowers.

His parents were the Titan Astraeus and Eos. His brothers are Notus (south wind), Boreas (north wind) and Eurus (east wind).

He was the husband of Chloris (goddess of greenery) and father of Carpus (god of fruit).

Statue of Zephyrus at the Palace of the Four Winds, Warsaw, Poland 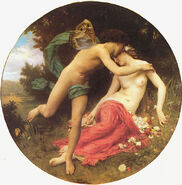 Zephyrus with Chloris
Add a photo to this gallery
Retrieved from "https://mythology.wikia.org/wiki/Zephyrus?oldid=116013"
Community content is available under CC-BY-SA unless otherwise noted.