The Wakwak is a vampiric, bird-like creature in Philippine mythology. In some places the Wakwak is believed to be instead another form a vampire can take, or it is a familar belonging to a witch or vampire. In any case, the sound associated with the Wakwak is considered to be an indicator that an Unglu (vampire) or Ungo (ghost or monster) is nearby.

It is said to snatch humans at night as prey, similar to the Manananggal and the Ekek in rural areas of the Philippines. It slashes and mutilates its victims and feeds on their hearts.

It is believed that this monster is called "Wakwak" due to this sound it makes when it flaps its wings while flying. When one hears the Wakwak, it is looking for possible victims. If the sound of the Wakwak is loud, it means it is far from you. Otherwise, it is near and worse yet, it is about to attack.

The Wakwak is generally described as a very large bird with either feathery or leathery wings, which is said to be as sharp as a knife. It is often described by old folks to have long sharp talons, which it uses to slash its victims and to get their heart.

As it hunts at night, and is considered to look similar to bats or crows in many stories, the coloration of its body is generally dark.

In some stories, the Wakwak has a few humanoid features with its bird body. Most commmonly described is a feminine, human-like face.

Some who have come across the Wakwak were able to scare it away with fire from a torch, or with a weapon in hand. One preventative measure some have used is to sprinkle salt boht on the inside and outside of the house, and hanging a garlice lantern in every corner. Others have instead placed a broom upside down in the doorway.[2]

The sound that a tiki, tike or teke (common house gecko) makes usually at night when out of sight was discovered by an American who spent much time in the Philippines to be the source of the sound everyone was saying was a "Wakwak". 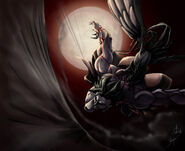 Retrieved from "https://mythology.wikia.org/wiki/Wakwak?oldid=96818"
Community content is available under CC-BY-SA unless otherwise noted.