A troll is a class of being in Norse mythology and Scandinavian folklore. In Old Norse sources, beings described as trolls dwell in isolated rocks, mountains, or caves, live together in small family units, and are rarely helpful to human beings.

Later, in Scandinavian folklore, trolls became beings in their own right, where they live far from human habitation, are not Christianized, and are considered dangerous to human beings. Depending on the source, their appearance varies greatly; trolls may be ugly and slow-witted, or look and behave exactly like human beings, with no particularly grotesque characteristic about them.

Trolls are sometimes associated with particular landmarks, which at times may be explained as formed from a troll exposed to sunlight. Trolls are depicted in a variety of media in modern popular culture.

Nordic literature, art and music from the romantic era and onwards has adapted trolls in various manners – often in the form of an aboriginal race, endowed with oversized ears and noses. They are often depicted with tails and hairy ears, similar to the ears of lynxes.The meaning of the word troll is unknown. It might have had the original meaning of supernatural or magical with an overlay of malignant and perilous. Another likely suggestion is that it means "someone who behaves violently" In old Swedish law, trolleri was a particular kind of magic intended to do harm. It should also be noted that North Germanic terms such as trolldom (witchcraft) and trolla/trylle (perform magic tricks) in modern Scandinavian languages does not imply any connection with the mythical beings. Moreover, in the sources for Norse mythology, troll can signify any uncanny being, including but not restricted to the Norse giants (jötnar). 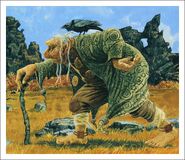 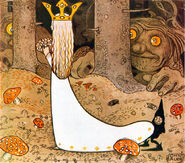 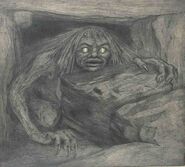 Olog-Hai another type of Troll in Middle-Earth Shadow of War. 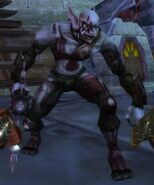 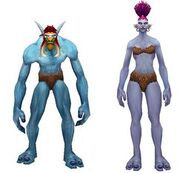 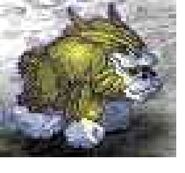 A Mountain Troll in Harry Potter.

A Cave Troll in Middle-Earth Lord of the Rings. 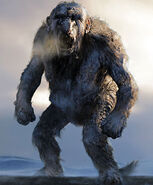 Trolls from Frozen Disney's version of the Snow Queen.

Add a photo to this gallery
Retrieved from "https://mythology.wikia.org/wiki/Troll?oldid=60036"
Community content is available under CC-BY-SA unless otherwise noted.