Tamamo no Mae (Japanese: 玉藻前 or たまものまえ, meaning “Lady Duckweed”)is one of the most famous kitsune in Japanese mythology. A nine-tailed magical fox, she is also one of the most powerful yōkai that has ever lived. Her magical abilities were matched only by her trickiness and lust for power. Tamamo no Mae lived during the Heian period, and though she may not have succeeded in her plan to kill the emperor and take his place, her actions destabilized the country and lead it towards one of the most important civil wars in Japanese history. For that reason, Tamamo no Mae is considered one of the Nihon San Dai Aku Yōkai—the Three Terrible Yōkai of Japan along side Shuten dōji and Ōtakemaru.

Tamamo no Mae was born some 3,500 years ago in what is now China. Her early life is a mystery, but she eventually became a powerful sorceress. After hundreds of more years she became a white faced, golden furred kyūbi no kitsune—a nine-tailed fox with supreme magical power. In addition, she was an expert at manipulation. She used her charms and wit to advance her standing and influence world affairs.

Daji in the Shang Dynasty (China)

In Magadha, she was known as Lady Kayō, and became a consort of King Kalmashapada, known in Japan as Hanzoku. She used her beauty and charms to dominate the king, causing him to devour children, murder priests, and commit other unspeakable horrors. Eventually—whether because she ran out children to eat or because Kalmashapada began to turn away from her and towards Buddhism—she fled back to China.

During the Zhou Dynasty she called herself Bao Si, and was known as one of the most desirable women in all of China. In 779 BCE she became a concubine of King You. Not satisfied as just a mistress, she manipulated the king into deposing his wife Queen Shen and making Bao Si his new queen. Though she was beautiful, Bao Si rarely ever smiled. In order to please his beautiful new wife, King You committed acts of such evil and atrocity that eventually all of his nobles abandoned and betrayed him. Eventually, King You was killed and Bao Si captured and the Western Zhou Dynasty was brought to an end in 771 BCE. Somehow Bao Si managed to escape again; she went into hiding for many years.

Little is known of her activities until the 700s, when she resurfaced disguised as a 16-year old girl named Wakamo. She tricked the leaders of the 10th Japanese envoy to the Tang Dynasty—Kibi no Makibi, Abe no Nakamaro, and Ganjin—as they were preparing to return home to Japan. Wakamo joined their crew and took the ship to Japan, where she hid herself away for over 300 years.

In the 1090s, she resurfaced once again. This time she transformed herself into a human baby and hid by the side of the road. A married couple found the baby and rescued it, taking her in as their daughter and naming her Mikuzume. She proved to be an exceedingly intelligent and talented young girl, and was so beautiful that she attracted to attention of everyone around her. When she was 7 years old, Mikuzume recited poetry before the emperor. His imperial majesty immediately took a liking to her and employed her as a servant in his court.

Mikuzume excelled at court, absorbing knowledge like a sponge. There was no question she could not answer, whether it was about music, history, astronomy, religion, or Chinese classics. Her clothes were always clean and unwrinkled. She always smelled pleasant. Mikuzume had the most beautiful face in all of Japan, and everyone who saw her loved her.

During the summer of her 18th year, a poetry and instrument recital was held in Mikuzume’s honor. During the recital, an unexpected storm fell upon the palace. All of the candles in the recital room were snuffed, leaving the participants in the dark. Suddenly, a bright light emanated from Mikuzume’s body, illuminating the room. Everybody at court was so impressed by her genius and declared that she must have had an exceedingly good and holy previous life. She was given the name Tamamo no Mae. Emperor Toba, already exceedingly fond of her, made her his consort.

Almost immediately after she became the emperor’s consort, the emperor fell deathly ill. None of the court physicians could determine the cause, and so the onmyōji Abe no Yasunari was called in. Abe no Yasunari read the emperor’s fortune and divined that he was marked by a bad omen. After that, the highest priests and monks were summoned to the palace to pray for the emperor’s health.

The best prayers of the highest priests had no effect, however. The emperor continued to grow worse. Abe no Yasunari was summoned again to read the emperor’s fortune. This time, to his horror the onmyōji discovered that the emperor’s beloved Tamamo no Mae was the cause of his illness. She was a kitsune in disguise, and was shortening the emperor’s life span in order to take over as ruler of Japan. Emperor Toba was reluctant to believe the diviner’s words, but agreed to test Tamamo no Mae just to be sure.

To save the emperor’s life, Abe no Yasunari prepared the Taizan Fukun no Sai, the most secret and most powerful spell known to onmyōdō. Tamamo no Mae was ordered to perform part of the ritual. They reasoned that an evil spirit would not be able to participate in such a holy ritual. Though she was reluctant to participate, the emperor’s ministers persuaded her. They told her that it would increase her standing an admiration among the court. She had little choice but to accept.

When the ritual was performed, Tamamo no Mae dressed even more beautifully than normal. She recited the holy worlds as expected and played her part extremely well. But just as she prepared to wave the ceremonial staff, she vanished. Abe no Yasunari’s divination was confirmed. The court flew into an uproar.

Death of the Kitsune

Soon after, word arrived that women and children were disappearing near Nasuno in Shimotsuke Province. The court sorcerers determined that Tamamo no Mae was the cause, and it was decided that she must be destroyed once and for all. The emperor summoned the best warriors in all of the land and then charged the most superb of them, Kazusanosuke and Miuranosuke, to find Tamamo no Mae. The warriors gladly accepted the honor. They purified themselves and set out with an army of 80,000 men to slay the nine-tailed kitsune.

Upon reaching Nasuno the army quickly found the kitsune. The warriors chased her for days and days, but the fox used her magical powers and outsmarted them time and time again, easily escaping. The army grew weary, and frustration set in. It seemed that nothing they did was working. However, Kazusanosuke and Miuranosuke would not accept the shame of defeat and vowed to press on. They practiced harder, honing their tactics, and eventually picked up the kitsune’s trail.

One night, Miuranosuke had a prophetic dream. A beautiful young girl appeared before him, crying. She begged: “Tomorrow I will lose my life to you. Please save me.” Miuranosuke adamantly refused, and upon waking the warriors set out again to find Tamamo no Mae. Sure enough, the next day they caught her. Miuranosuke fired two arrows, one through the fox’s flank and one through its neck. Kazusanosuke swung his blade. It was over, just as the dream had said.

However, Tamamo no Mae’s evil did not end with her death. One year after she died, Emperor Konoe died, heirless. The following year, her lover and former Emperor Toba died as well. A succession crisis ignited between forces loyal to Emperor Go-Shirakawa and forces loyal to former Emperor Sutoku. This crisis started the Fujiwara-Minamoto rivalry that led to the Genpei War, the end of the Heian period, and the rise of the first shoguns. As if that were not enough, Tamamo no Mae’s spirit haunted a massive boulder which killed every living thing that touched it.

Tamamo no Mae appears in numerous texts and has been a popular subject throughout Japanese history. Her story is portrayed in literature, noh, kabuki, bunraku, and other forms of art. There are several variations on her story. 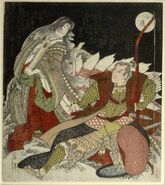 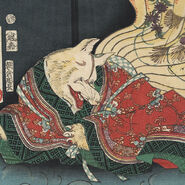 Add a photo to this gallery
Retrieved from "https://mythology.wikia.org/wiki/Tamamo_no_Mae?oldid=74283"
Community content is available under CC-BY-SA unless otherwise noted.