Record of Ragnarok (終末のワルキューレ, Shūmatsu no Warukyūre, lit. Valkyrie of the End) is a Japanese manga series written by Shinya Umemura and Takumi Fukui and illustrated by Chika Aji. It began in Tokuma Shoten's seinen manga magazine Monthly Comic Zenon in November 2017.

The story begins when the gods call a convention to decide the whether to let humanity live or die, and settle on destroying humanity. However, the valkyrie Brynhildr puts forward a suggestion to let the gods and humanity fight one last battle, as a last hope for humanity's continued survival. 13 gods will fight against 13 human champions in one-on-one battles to decide whether humanity lives or dies.[1] To even the odds, each human is granted the assistance of a valkyrie who transforms into a powerful weapon tailored for their combat style called "Volund", at the risk of losing her life if the user is defeated. 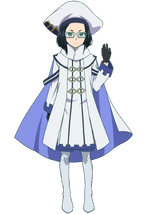 Lü Bu
Add a photo to this gallery

Brynhildr speaks up in front of the gods.

Brynhildr is confronted by Þórr.

Introduction of Mjǫllnir from the Prose Edda.
Add a photo to this gallery

This page uses content from Wikipedia. The original article was at Record of Ragnarok (view authors). As with Mythology wiki, the text of Wikipedia is available under the Creative Commons Attribution-Share Alike License 3.0 (Unported).
Retrieved from "https://mythology.wikia.org/wiki/Record_of_Ragnarok?oldid=119546"
Community content is available under CC-BY-SA unless otherwise noted.