coasts, rivers, and other bodies of water; native to Kyushu

Nure onna (Japanese: 濡女 or ぬれおんな, meaning "Wet woman") or Nure-yomejo are vampiric sea serpents who haunt shores and rivers, looking for humans to eat. They are most commonly found on the shores of Kyushu, but there are stories of nure onna encounters as far north as Niigata and as far east as Fukushima.

While physically much stronger than a human, nure onna prefer to use trickery and guile to catch their prey, rather than relying on brute force. They most often appear on the coast near the water or by a riverbank, magically disguised as a distressed woman carrying a bundled up baby. They cry out for help from fishers, sailors, or anybody passing by. When the prey approaches, a nure onna will plead with him to hold her baby for just a moment so that she can rest.

If he agrees and takes the bundle, it quickly becomes as heavy as a boulder, and her victim is unable to move. The Nure onna is then free to attack her helpless victim, feeding by draining his blood with her long, serpentine tongue.

Nure onna frequently appear together and cooperate with ushi oni, as they inhabit the same environments and share the same diet.

There are two variations of nure onna: one without arms, which resembles an enormous sea serpent with a woman’s head, and one with human-like arms. Aside from this difference, the two varieties look and act in exactly the same manner. Their faces are hideous and often betray serpent-like features, such as a forked tongue. They have long black hair which sticks to their dripping bodies. The name comes from the fact that they always appear sopping wet. 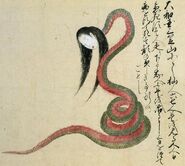 Add a photo to this gallery
Retrieved from "https://mythology.wikia.org/wiki/Nure-onna?oldid=91626"
Community content is available under CC-BY-SA unless otherwise noted.