Mars was the Roman god of war, the son of Juno and either Jupiter or a magical flower. As the word Mars has no Indo-European derivation, it is most likely the Latinized form of the agricultural Etruscan god Maris. Initially the Roman god of fertility and vegetation and a protector of cattle, fields and boundaries, Mars later became associated with battle and identified with the Greek god Ares. He was also a tutelary god of Rome, and as the legendary father of its founder, Romulus, it was believed that all Romans were descended of Mars.

Thor is the red-haired and bearded god of thunder in Norse mythology and more generally Germanic mythology. He is the son of Odin and Jord. During Ragnarök, Thor will kill and be killed by Jörmungandr.

Thor features strongly in the Prose Edda of Snorri Sturluson, in which Thor's many conflicts with the race of giants are a main source of plots. Thor is one of the most powerful Norse gods. He uses his superior power to protect Asgard and Midgard. He is also known as the God of Thunder. Several Finno-Ugric peoples have thunder gods with names similar to Thor: Tiermes, Tordöm or Torum ("the golden light", Finno-Ugric). Some, like Estonian Taara even retain the connection with Thursday. 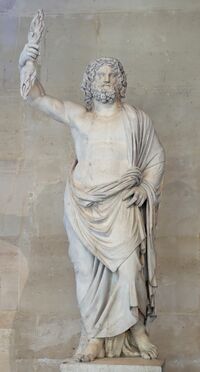 Zeus /ˈzjuːs/ (Ancient Greek: Ζεύς, Zeús, [zdeǔ̯s]; Modern Greek: Δίας, Días [ˈði.as]) is the God of the sky, weather, thunder, lightning, storms, air, law, order, justice, fate, honor, hospitality, governance and moral conduct in Greek mythology, who ruled as King of the Gods on Mount Olympus. His name is cognate with the first element of his Roman equivalent Jupiter. His mythologies and powers are similar, though not identical, to those of the Indo-European deities such as Indra, Jupiter, Perun, Thor, and Odin. Zeus is the child of Cronus and Rhea, the youngest of his siblings to be born, though sometimes reckoned the eldest as the others required disgorging from Cronus's stomach. In most traditions, he is married to Hera, by whom he is usually said to have fathered Ares, Hebe, and Hephaestus. At the oracle of Dodona, his consort was said to be Dione, by whom the Iliad states that he fathered Aphrodite. Zeus was also infamous for his erotic escapades. These resulted in many godly and heroic offspring, including Athena, Apollo, Artemis, Hermes, Persephone, Dionysus, Perseus, Heracles, Helen of Troy, Minos, and the Muses.

He was respected as an allfather who was chief of the gods and assigned the others to their roles: "Even the gods who are not his natural children address him as Father, and all the gods rise in his presence." He was equated with many foreign weather gods, permitting Pausanias to observe "That Zeus is king in heaven is a saying common to all men". Zeus' symbols are the thunderbolt, eagle, bull, and oak. In addition to his Indo-European inheritance, the classical "cloud-gatherer" (Greek: Νεφεληγερέτα, Nephelēgereta) also derives certain iconographic traits from the cultures of the ancient Near East, such as the scepter. Zeus is frequently depicted by Greek artists in one of two poses: standing, striding forward with a thunderbolt leveled in his raised right hand, or seated in majesty. 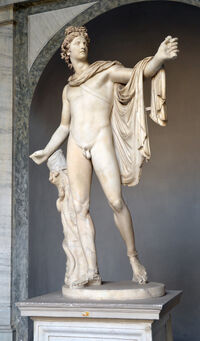 Apollo is the only Greek god to have the same name as his Roman counterpart. He is the God of the Sun, light, healing, medicine, prophecy, knowledge, oracles, purity, art, music (he directed the choir of the Muses), poetry, archery (but not for war or hunting) and plagues, and also the protector of herds and flocks.

He is the son of Zeus and Leto and the younger twin brother of Artemis. He was born on the island of Delos, which is sacred to him. His paternal grandparents were Cronus and Rhea. His maternal grandparents are Coeus and Phoebe (from whom he takes the ephithet "Phoebus" meaning "radiant" or "beaming"). He was sometimes identified with the sun god Helios.

Pegasus was a mythological horse from Greek mythology. It was supposedly a dazzling white horse with two great feathery wings sprouting from its back. It was said to be the son of Poseidon and Medusa.

After the hero Perseus slayed the gorgon Medusa, the blood that flowed from her neck spread over the ground and from it formed grassy fields and gushing rivers; beautiful trees and singing birds also came, and finally, the Pegasus. The greeks say that Pesasus flew from the isle afterwards towards the mountain Helicon, where he was watched over by the Muses. (An alternation of the story is similar as it states Pegasus was formed when the blood of Medusa met the sea foam, thus meaning that Medusa was the mother and Poseidon the father.)

The Trojan War was a 10-year long war fought at Troy between Mycenae and her allies (notably Sparta, Athens, Pylos, Thebes, etc), against Troy and her allies (notably Dardania, Lycia, Aethiopia, Amazonia, Thrace). The war consisted mainly of the siege of the city of Troy, as well as sallies made by the defenders and Greek forays into neighbouring regions allied with the Anatolian city. The Trojan War ended with the trick retreat of the Greek forces, with a small number remaining in a wooden horse. The Trojans rolled the horse into the city believing it was a peace offering and a gift to the Gods. When night fell, the Greek men got out of the horse and opened the city gates, enabling the returning Greek armies to breach the city and ransack it.

A goblin is a type of fae creature from traditional European folklore. The word "goblin" is originally derived from the Greek word "Kobalos," which translates into English as "Rogue" or "Evil Spirit." The word goblin has traditionally been reserved for any ugly fae that is either mischievous or malevolent. Because of this, the term goblin has been used to describe a wide variety of creatures found in a multitude of traditions throughout Europe. The term goblin can be quite nebulous; and in some cases it can be unclear if a creature would be better described as a goblin, a fae, or an elf. After the publication of J. R. R. Tolkien's The Hobbit in 1937 and The Lord of the Rings trilogy between 1954 and 1955, the view of goblins in modern Western fantasy began to change. Goblins were now commonly seen as their own distinct race of humanoid creatures. Typical features of goblins in modern fantasy includes a shorter-than-human stature, either a flat or long and hooked nose, bat-like ears, and either a mischievous or malevolent demeanor. Somewhat paradoxically, in the study of folklore the term goblin has at times been expanded to include a variety of creatures from non-Western traditions that are seen to be "goblin-like" by Western scholars.

Retrieved from "https://mythology.wikia.org/wiki/Mythology_wiki:Featured_articles?oldid=86315"
Community content is available under CC-BY-SA unless otherwise noted.