Kappa (Japanese: 河童 or かっぱ, meaning "River child") are aquatic reptilian humanoids who inhabit the rivers and streams found all over Japan. Clumsy on land, they are at home in the water, where they thrive during the warm months. They are excellent swimmers, and despite their small size they are physically stronger than a grown man.

Kappa are generally the size and shape of a human child, with scaly skin ranging in earthy hues from deep green to bright red, even blue. Their bodies are built for swimming, with webbed, thumbless hands and feet, and a turtle-like beak and shell. Their elastic, waterproof skin reeks of fish, and is said to be removable. They possess three anuses, allowing them to pass three times as much gas as a human. Kappa forearms are attached to one another inside of their shells, and pulling on one arm will cause it to lengthen while the other one contracts.

A dish-like depression lies on top of their skulls. This dish is the source of a kappa’s power and must be kept wet at all times; should the water be spilled and the dish dry up, the kappa will be unable to move and may even die.

Adult kappa often live solitary lives, although it is common for them to befriend other yokai and even humans. Younger kappa are frequently found in family groups. Kappa are proud and stubborn, but also fiercely honorable; they never break any promises that they make. Kappa possess keen intelligence and they are one of the few yokai able to learn human languages. They are also highly knowledgeable about medicine and the art of setting bones; according to legend, these skills were first taught to humans by friendly kappa.

They will eat almost anything, but they are particularly fond of raw innards –particularly human anuses – and cucumbers. They love mischief, martial arts like sumo wrestling, and games of skill like shogi.

Kappa are revered in Shinto as a kind of water god. It is not uncommon to see offerings of cucumbers made at riverbanks by devout humans; in return, kappa are known to help people by irrigating fields, befriending lonely children, competing with adults in sports and games, and so on.

Kappa can also be crass and violent. Mischievous by nature, they love to peek up women’s kimonos and loudly pass gas in public. Lakes and rivers where kappa live are often marked with warning signs. Their preferred method of attack is to drown or bite their opponent to death under water. They particularly despise cows and horses, and will attack the animals for no reason at all. They have been known to kidnap or rape swimming women, and to devour humans alive. Usually they go for the anus – in particular a mythical ball of flesh located just inside the anus, called the shirikodama. In the water, there is no escape for anyone who crosses a Kappa. On land, however, it is possible to outwit one: the honorable kappa will feel obliged to return a bow, and if it can be tricked into bowing so low that the water in its dish spills out, it can be easily overcome. Once bested, many kappa have been made to swear loyalty and friendship to their victor for the rest of their lives.

The picture on the right shows a kappa that was caught in a net in Mito, Japan in 1801. This kappa had a turtle-like chest, a crooked back and three anuses. The middle picture above shows a humanoid kappa with no shell. The kappa on the left of the picture, sketched by Ito Chobei, was captured during the Meiwa period (1764 to 1772) in Edo, somewhere in present-day Tokyo's Edogawa ward. When the creature was shown to Ota Chogen, he identified it as a kappa. Ota happened to have a kappa sketch with him that showed a creature with similar features. According to the text in the book, this kappa measured 60 cm (2 ft) tall and had slippery skin like that of a catfish. A kappa that was observed in one of the moats around Edo castle in the late 18th century. Another was observed in the early 17th century in what is now the city of Hita in Oita prefecture. This turtle-like kappa appears as been in its hind legs, webbed fingers, and splotches on its chest and abdomen.

Kappa legends are possibly based on the Japanese giant salamander, also known as hansaki.

Kappa sketches made in the Edo Period 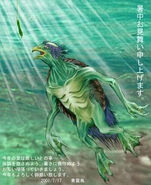 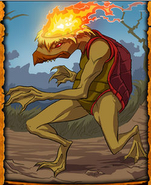 The playable character Kuzenbo in the game SMITE 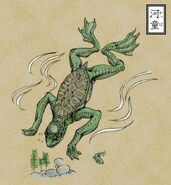 Add a photo to this gallery
Retrieved from "https://mythology.wikia.org/wiki/Kappa?oldid=101821"
Community content is available under CC-BY-SA unless otherwise noted.