Freyr (Old Norse: Lord), sometimes anglicized as Frey, is a widely attested god associated with sacral kingship, virility and prosperity, with sunshine and fair weather, and pictured as a phallic fertility god in Norse mythology. Freyr is said to "bestow peace and pleasure on mortals." Freyr, sometimes referred to as Yngvi-Freyr, was especially associated with Sweden and seen as an ancestor of the Swedish royal house.

In the Icelandic books the Poetic Edda and the Prose Edda, Freyr is presented as one of the Vanir, the son of the sea god Njörðr, as well as the twin brother of the goddess Freyja. The gods gave him Álfheimr, the realm of the Elves, as a teething present. He rides the shining dwarf-made boar Gullinbursti and possesses the ship Skíðblaðnir which always has a favorable breeze and can be folded together and carried in a pouch when it is not being used. He has the servants Skírnir, Byggvir and Beyla.

The most extensive surviving Freyr myth relates Freyr's falling in love with the female Jötunn Gerðr. Eventually, she becomes his wife but first Freyr has to give away his magic sword which fights on its own "if wise be he who wields it." Although deprived of this weapon, Freyr defeats the jötunn Beli with an antler. However, lacking his sword, Freyr will be killed by the fire jötunn Surtr during the events of Ragnarök.

Like other Germanic deities, veneration of Freyr is revived in the modern period in Heathenry movement.

Written around 1080, one of the oldest written sources on pre-Christian Scandinavian religious practices is Adam of Bremen's Gesta Hammaburgensis ecclesiae pontificum. Adam claimed to have access to first-hand accounts on pagan practices in Sweden. He refers to Freyr with the Latinized name Fricco and mentions that an image of him at Skara was destroyed by the Christian missionary, Bishop Egino. His description of the Temple at Uppsala gives some details on the god.

Later in the account Adam states that when a marriage is performed a libation is made to the image of Fricco.

Historians are divided on the reliability of Adam's account. While he is close in time to the events he describes he has a clear agenda to emphasize the role of the Archbishopric of Hamburg-Bremen in the Christianization of Scandinavia. His timeframe for the Christianization of Sweden conflicts with other sources, such as runic inscriptions and archaeological evidence does not confirm the presence of a large temple at Uppsala. On the other hand, the existence of phallic idols was confirmed in 1904 with a find at Rällinge in Södermanland. 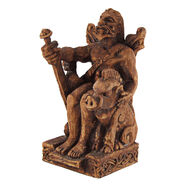 Retrieved from "https://mythology.wikia.org/wiki/Freyr?oldid=56546"
Community content is available under CC-BY-SA unless otherwise noted.