This article is about Egyptian mythology, for Egyptians in Greek mythology, see Egyptians

Egyptian mythology is the collection of myths from ancient Egypt, which describe the actions of the Egyptian gods as a means of understanding the world. The beliefs that these myths express are an important part of ancient Egyptian religion. Myths appear frequently in Egyptian writings and art, particularly in short stories and in religious material such as hymns, ritual texts, funerary texts, and temple decoration. These sources rarely contain a complete account of a myth and often describe only brief fragments.

Inspired by the cycles of nature, the Egyptians saw time in the present as a series of recurring patterns, whereas the earliest periods of time were linear. Myths are set in these earliest times, and myth sets the pattern for the cycles of the present. Present events repeat the events of myth, and in doing so renew maat, the fundamental order of the universe. Amongst the most important episodes from the mythic past are the creation myths, in which the gods form the universe out of primordial chaos; the stories of the reign of the sun god Ra upon the earth; and the Osiris myth, concerning the struggles of the gods Usir, Aset, and Hor against the disruptive god Set. Events from the present that might be regarded as myths include Ra's daily journey through the world and its otherworldly counterpart, the Duat. Recurring themes in these mythic episodes include the conflict between the upholders of maat and the forces of disorder, the importance of the pharaoh in maintaining maat, and the continual death and regeneration of the gods.

The details of these sacred events differ greatly from one text to another and often seem contradictory. Egyptian myths are primarily metaphorical, translating the essence and behavior of deities into terms that humans can understand. Each variant of a myth represents a different symbolic perspective, enriching the Egyptians' understanding of the gods and the world.

Mythology profoundly influenced Egyptian culture. It inspired or influenced many religious rituals and provided the ideological basis for kingship. Scenes and symbols from myth appeared in art in tombs, temples, and amulets. In literature, myths or elements of them were used in stories that range from humor to allegory, demonstrating that the Egyptians adapted mythology to serve a wide variety of purposes.

Some major Egyptian Gods include

The Egyptian word maat refers to the fundamental order of the universe in Egyptian belief. Maat was established at the creation of the world, distinguishing the world from the chaos that preceded and surrounds it. Maat encompasses both the proper behavior of humans and the normal functioning of the forces of nature, both of which make life and happiness possible. Because the actions of the gods govern natural forces and myths express those actions, Egyptian mythology represents the proper functioning of the world and the sustenance of life itself.[1] To Egyptians, the most important maintainer of the Maat (order or balance) is the pharaoh. In myth the pharaohs are sons of a variety of deities, usually Horus, therefore they are the designated subject to occupy such position.

Most of ancient Egypt's history is told through the use of significant symbols, which often depicted artifacts, people or animals. 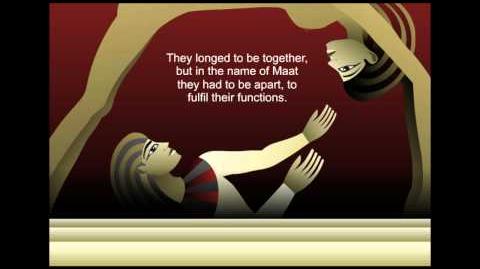 Retrieved from "https://mythology.wikia.org/wiki/Egyptian_mythology?oldid=65111"
Community content is available under CC-BY-SA unless otherwise noted.