This article about Chupacabra is a stub. You can help Mythology wiki by expanding it.

The Chupacabra is a legendary cryptid rumored to inhabit parts of the Americas. The name comes from the Spanish word that means "Goat Sucker". As it's name implies rumors of such a possible creature, came to be due to several instances in which livestock in rural areas were found dead, drained of blood with nothing but to puncture marks on carcases. These incidents are associated with relatively recent sightings of an unknown animal in Puerto Rico (where these sightings were first reported), Mexico, and the United States, especially in the latter's Latin American communities.

Physical descriptions of the creature vary. Eyewitness sightings have been claimed as early as 1995 in Puerto Rico, and have since been reported as far north as Maine, USA and as far south as Chile, and even being spotted outside the Americas in countries like Russia and the Philippines. It is supposedly a heavy creature, the size of a small bear, with a row of spines reaching from the neck to the base of the tail.

The sighting reports of chupacabras end up being uncorroborated eyewitness reports without evidence. Biologists and wildlife management officials view the chupacabras as a contemporary legend.

In one of the more notable cases of vampiric entities in the modern age, the chupacabra ("goat-sucker") of Puerto Rico and Mexico is said to be a creature that feeds upon the flesh or drinks the blood of domesticated animals, leading some to consider it a kind of vampire. The "chupacabra hysteria" was frequently associated with deep economic and political crises, particularly during the mid-1990s. 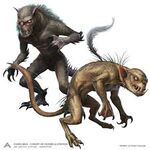 Retrieved from "https://mythology.wikia.org/wiki/Chupacabra?oldid=109496"
Community content is available under CC-BY-SA unless otherwise noted.