Shíshī (石狮/石獅) are also known as Fu/Foo Lions, Lions of Buddha, or Chinese guardian lions. They are a mythological Chinese lion, though many depictions of them bear more similarity to dogs than felines.

The ball is said to symbolize the unity of the Chinese Empire, and the cub thriving offspring. Sometimes the male will have an open mouth and the female a closed mouth; sometimes both mouths will be partially open, often containing a pearl.

In India, the male’s open mouth is said to be voicing an “A”, the female a “M”. Together, the two shíshī speak the sacred word “Om” or “AUM”.

In Japan, shíshī are called Koma-inu (こま犬). They are depicted as playful but fierce guardians of children and are often placed outside Shinto shrines to guard against evil. The male is said to be inhaling, representing life; the female is said to be exhaling, representing death. This may explain why, though shíshī are a popular motif for kimono, the male is usually depicted alone. 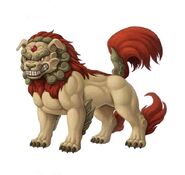 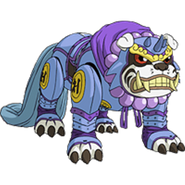 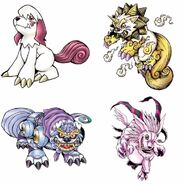 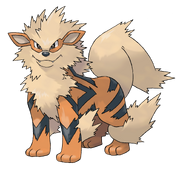 Add a photo to this gallery
Retrieved from "https://mythology.wikia.org/wiki/Chinese_guardian_lions?oldid=113868"
Community content is available under CC-BY-SA unless otherwise noted.