The Chimera (alternately called Kimera, Chimaera, etc.) is a mixed beast from Greek lore whose body typically consists of various bits of a lion, a goat, and a serpent. It is known to breathe fire while the snake portion is venomous.

The Chimaera may have once been identified with the winter-rising constellation of Capricorn, the serpent-tailed goat.

The Chimera was rampaging in the area, and so King Iobates commanded the Greek hero Bellerophon to slay the Chimaera. He rode into battle on the back of the winged horse, Pegasus.

Bellerophon fought defeated the Chimaera by placing a lump of lead on his spear and holding it in front of its mouth. The fire-breathing monster melted the lead with its breath and the molten lead flowed down its throat and eventually killed it.

Typically, it is portrayed with the body and head of a male lion, the head and body of a lion, with the head of a goat arising from its back,  and a tail that might end with a snake head.[1] She does not typically have the power of flight, a weakness which is exploited by Bellerophon on his flying steed, Pegasus.

Chimaera is also the term used to refer to any other creature or being with both physical and mental characteristics or traits from various other creatures.

It was was one of the offspring of the monster Typhon and his niece, the drakaina Echidna.[2] As such, it is the sister of Cerberus, Orthrus, the Nemean Lion, the Lernaean Hydra, Scylla, and many other monsters. Other legends attribute the Nemean Lion to be the offspring of the chimaera rather than her brother. According to Homeric poems, the Chimaera was of divine origin.

Western scholars of Chinese art use the word Chimera to refer to winged quadrupeds such as the Bixie, Tianlu and the qilin. However, there are a myriad of other hyrid beasts that are not considered chimaeras such as Kitsunes.

It is possible that the myth could have been inspired by permanent gas vents along the Lycian Way in southwest Turkey. The origin of the notion of this fire-breathing nature of the Chimera must probably come from the volcano named Chimaera near Phaselis, in Lycia,[3] or it may have originated on the volcanic valley near the Cragus,[4] which is mentioned as the scene of the events connected with the Chimera.

The word or term Chimera has two alternative forms: Chimaera and Chimæra. The term by itself has various meanings:

"Chimera of Arezzo": an Etruscan bronze

Bellerophon & Pegasus vs. the Chimera

The Ice Chimera of Ascension (God of war: Ascension)

A Chimera from God of War III

Chimera in Wrath of the Titans

Chimera in Wrath of the Titans

Chimera in My Little Pony Friendship is Magic.

A traditional Chimera from Fullmetal Alchemist

Chimera in Class of the titans 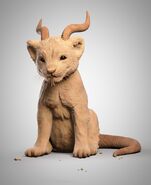 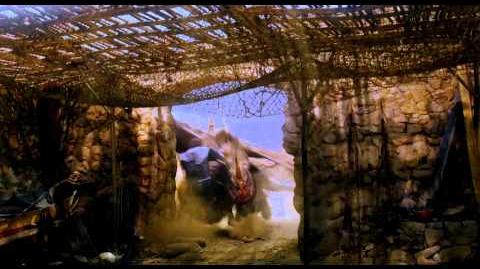 Retrieved from "https://mythology.wikia.org/wiki/Chimera?oldid=111982"
Community content is available under CC-BY-SA unless otherwise noted.