The Basilisk (Latin Basiliscus, Basilisc, plural Basilisci, also Basilicok, Greek: Basiliskos plural: Basiliskoi) appeared in various forms throughout history. It started off as a small, crowned snake being able to kill with its lethal poison and evil gaze. The poison was so lethal, it left a wide trail of venom in its wake.

Despite its cruel nature, it still represents power (and sometimes that of Hell in Christian mythology), thus it became the guardian creature and the traditional symbol of the Swiss city Basel.

The basilisk is believed to be the most poisonous creature ever lived, there are tales where the basilisk was killed by a spear from horse-back, but the poison flowed upward and killed both the man and the ride. Its presence is so tainting, that not only herbs die of its terrible breath, but stones shatter as well. The basilisk's venom is so strong, that upon drinking from a well, the water remains polluted for centuries, bringing death to anyone drinking it.

The basilisk can only be a male, for it must have the most proper receptacle of venom and destructive qualities. It’s is also said to be so evil that when it cannot petrify animals, it turns to plants, withering them anywhere it goes.

Medieval travelers described it as a large, fire breathing creature with a terrifying roar. It soon be came descirbed as a rooster with a serpent's tail and (occasionally) dragon wings. This shows similarities with the cockatrice, but there is one difference. The basilisk is said to be hatched from the egg of a rooster (yes, rooster, not chicken) and incubated by a toad, while the birthing process of a cockatrice is vica versa, a toad's egg hatched by a rooster.

Another description of the basilisk is of a lizard with a rooster's head, the tail of a serpent and eight chicken legs. Based off of this, many modern depictions of a basilisk as a large, six- or eight-legged lizard, armed with a petrifying gaze.

The tales about the basilisk being petrified by its own appearance in a mirror exist, but it can be slayed by other various methods. It is also vulnerable to the cockcrow of a rooster. This belief lead to travelers carrying roosters for self protection.

It can also be stopped by the odor of a weasel. The villagers threw it in the pit (recognized by the dying vegetation nearby) of the basilisk in hope to get rid of the beast. The weasel itself usually kills the basilisk on its own as well by urinating on the monster, but this almost always leads to the death of the mammal. 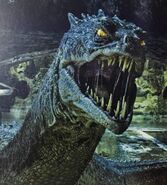 Basilisk from Harry Potter and the Chamber of Secrets.

Retrieved from "https://mythology.wikia.org/wiki/Basilisk?oldid=111789"
Community content is available under CC-BY-SA unless otherwise noted.