Banshees are believed by some to be spirits of nature or pre-Christian Gaelic deities. In Theosophy and in Celtic Christian religion, they are commonly called "fallen angels". In English, they are described as a "fairy" or "woman of mound".

The Banshee is also said to be tasked with the job of warning selected members of ancient Irish families of the time of their death. According to tradition, the banshee was only said to cry for four major families but this list seems to have been extended due to marriage.

Rarely seen but heard, her mourning call is often given at night when someone is about to die. In 1437, Scottish King James the I is said to have been approached by one such being. There have been numerous reports of same thing happening to members of the royal court and other high-profile members of Irish society.

The quality of her voice varies to region to region. Some describe it as 'low and pleasant' which can be used to comfort people or generally just to make them feel good and others as 'a mix of a wail of a woman and a moan of an owl' which can hypnotize many. Some also take to singing songs to do the work, and put power into it without changing the sound. Banshees also appear in places where there is great sorrow and pain.

When several banshees appear at once, it is said that a person great or holy has died. Banshee are commonly depicted as having long, fair hair which they comb with a silver comb. If one is to see such a comb, it is suggested not to pick it up or that person might be spirited away. Though to some the comb is simply a gift to someone they love or feel is important.

Apparently, in terms of clothing, she either wears a grey, hooded cloak or a grave robe meant for the unshriven dead (those who had died without being absolved of their sins).

Banshee usually come in three of many forms, the first being a young woman, the second being a rich middle-aged lady or matron, and the third being of a fraglie old woman. Another time they are seen as a washing woman, where she is apparently seen washing the bloodstains out of the fated person clothes.

Banshee are fairly popular and enjoy the same status (in Ireland) as leprechauns. One possible origin of the Banshee are "keeners," woman in Ireland that sing songs of lament at funerals. The majority of these women quite possibly could be banshees that feel the need to sing in an attempt to raise or lower the feelings of those attending. 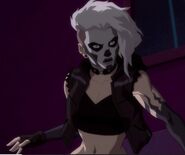