Arachne was a mortal woman from the country of Lydia in Greek mythology. She was a great weaver who claimed to be better at weaving than Athena.

The goddess Athena had taught men to make tools, and she had taught women how to weave. With this gift, Arachne claimed herself to be the best weaver, even greater than the goddess of arts and crafts herself; she declared that a contest should be held to see who was the better weaver. Athena then transformed into an old woman to try and talk Arachne out of the contest and to beg forgiveness from the goddess for her misconduct, but Arachne only scorned the old woman and took nothing back. Outraged by the maiden's stubborn arrogance and ungratefulness, Athena emerged from her disguise and accepted the challenge. Arachne remained fearless, but still stubborn; determined to win the contest, she hastened to her fate.

Athena's tapestry had four corners that were decorated with miniature scenes showing the terrible fate of arrogant women who were disrespectful to the gods. With these, Athena hoped to warn the maiden about what she could expect from her pride and presumption. Arachne's tapestry, however, was decorated with miniature scenes as well, but she had done so to ridicule the immortal gods. They illustrated the many love affairs of Zeus, as well as the many romantic exploits of Poseidon, Apollo, and Dionysus.

Once the contest was finished, Athena admired Arachne's talent, but couldn't tolerate her disrespect. Athena tore apart the tapestry and struck Arachne three times on her forehead with the shuttle. Distraught with defeat, Arachne knit a rope around her neck and tried to hang herself, but Athena showed pity on her by catching her. She, however, couldn't release Arachne from her punishment; she said, "Live, wicked wretch, but hang forevermore. Let my curse remain even upon your children and their children to the end of all your race." Athena then sprinkled some juice from the leaves of a poisonous plant onto Arachne, and she transformed into a spider.

Thus, now Arachne and her descendants (the "arachnids") were to weave for all of eternity. 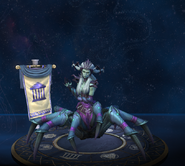 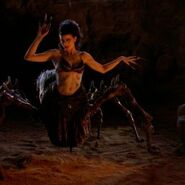 Retrieved from "https://mythology.wikia.org/wiki/Arachne?oldid=103141"
Community content is available under CC-BY-SA unless otherwise noted.