The Amazons were a race of female warriors in Greek mythology, who dwelt in the region of modern-day Ukraine. Two of the best known Amazon queens were Penthesilea, who took part in the Trojan War, and her sister Hippolyta, who was the owner of a magical girdle, given to her by the god of war Ares. The magical girdle was the object that Heracles had to recover to complete the fourth task given to him during the myth of the Labours of Heracles.

There were no men allowed to live together with the Amazons. However, in order to continue their race, once a year, the Amazons would visit a nearby tribe called Gargareans. After having sexual intercourse with them, the Amazons would return home; they would keep all baby girls that were born, but the male babies were either killed, sent to their fathers, or left in a forest to die of exposure to the elements.

The Amazons appeared in various Greek myths. In one of them, they attacked the region of Lycia, but were fended off by Bellerophon. They later attacked Phrygia, but were also defeated by the defending army, led by a young Priam, who later became the king of Troy. During the Trojan War, the Amazons, led by Queen Penthesilea, helped Priam defend his city; Penthesilea was killed by Achillesduring a battle. 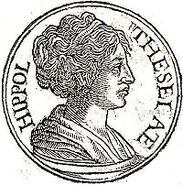 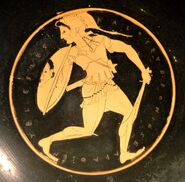 A helmeted Amazon with her sword and a shield bearing the Gorgon head image, Tondo of an Attic red-figure kylix, 510–500 BC 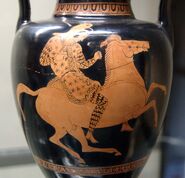 Mounted Amazon in Scythian costume, on an Attic red-figure vase, c.420 BC

Retrieved from "https://mythology.wikia.org/wiki/Amazons?oldid=103226"
Community content is available under CC-BY-SA unless otherwise noted.